Vibration studies at the Leather Museum 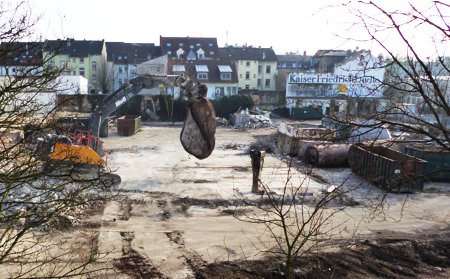 Deutsches Ledermuseum in Offenbach am Main

On the adjacent property to the German Leather Museum in Offenbach am Main, building work is taking place for the construction by 2020 of twelve multi-family houses (known as the Kappus-Höfe), including an underground car park. The buildings on the former factory site were demolished back in November 2017.

During the demolition work, very strong vibrations in the building and the exhibits of the leather museum were noticed, frequently and repeatedly.

Lifting and dropping a composite part for waste separation and dismantling at the Kappus-Höfe construction site, Offenbach, in the immediate vicinity of the Leather Museum, © K. Kracht

The effects of these shocks so far include accelerated decay of leather that is in the process of being restored, and objects that have moved from the places where they had been installed within the display cases. Construction activities that cause strong vibrations, such as pile-driving, will follow the demolition work.

The German Leather Museum was founded a hundred years ago. It is housed in a building complex at Frankfurter Str. 86 in Offenbach am Main. This building complex consists of an older, listed building from 1828/1829, which stands on pilings, and an extension dating from the 1960s, to which a further floor was added in the 1980s.

The collection of the German Leather Museum in Offenbach comprises more than 30,000 objects. The objects’ ages range from contemporary to 6,000 years old and the sizes vary from 5 mm (smallest items) to 10 m (largest items).

The materials used for the objects are leather, mostly in combination with other natural materials and furs, as well as ceramics, glass, wood, plastic etc.

The collection as a whole is extremely valuable, both for its uniqueness and from an ethnological and art history point of view. Various items are the only such examples in the world.

Due to the ephemeral nature of natural materials, the objects in the Leather Museum can be classified as particularly sensitive. Dynamic loads play a special role here. Due to the way materials such as leather naturally become brittle and decompose, the effect of vibrations and shocks on these objects is abrasion. In other words, dynamic loads on these objects make them decay to dust at the joins. Material changes can result in cracks where different materials meet.

The increasing decomposition into leather dust as a result of the construction work has been demonstrated in archaeological shoe fragments that are currently being restored and preserved in the restoration workshop of the German Leather Museum.

As the building complex of the German Leather Museum in Offenbach consists of an old building and a younger section, DIN 4150-3:2016 (rows 2 and 3 of Table 1 for short-term vibrations and Table 4 for long-term vibrations) is formally applicable. This defines a maximum permissible velocity amplitude of 3 mm/s.  On the one hand, tests are needed to see whether this limit value, which applies to the building, can also be applied to the objects; on the other, the question of where the data logger should be installed needs to be resolved.

Subject matter of the project:

• Determining which rooms react particularly sensitively to vibrations and shocks occurring on the adjacent property;
• Analysing the vibration characteristics of the floors and showcases located in these rooms;
• Investigating the operational vibrations of the floors and showcases during excitation by visitor groups (for comparison with the effects of construction site noise);
• Comparing the data collected against data from the laboratory system and the data logger;
• Conclusions derived from the operational vibrations and the vibration behaviour of the floors/display cases as measured in the sensitive locations of the museum, as well as from the measurements recorded with the data logger during construction operations, with regard to the potential of the construction site vibrations for causing damage.

1. Inspection of the entire museum building.

2. Determination of the rooms that are particularly sensitive to construction site noise, based on the inspection and on the experience of museum staff.

3. Modal analysis (determination of eigenfrequencies, eigenforms and modal damping) of the floors and showcases in sensitive rooms.

4. Operational vibration analysis of the floors and showcases resulting from public traffic.

5. Data analysis and evaluation with regard to the potential for damage to objects and buildings.

Based on the analysis of the data from the data logger plus the operational vibrations caused by passenger traffic, it could be shown by comparison against the modal data (eigenfrequencies, eigenforms and damping) that the natural oscillations of the Leather Museum building will be excited. These are, on the one hand, rocking movements at about 4 Hz and (depending on the size of the room) bending vibrations of the respective floors at 7 to 16 Hz (dominant flexing vibrations). The vertical floor vibrations excite the showcases, shelves and cabinets into resonant oscillations (tilting and flexing vibrations of the supporting surfaces) in the horizontal direction. These are also in a range of frequencies from 4 Hz to 17 Hz, i.e. in the range of the above-mentioned excitations.  The amplification of the vertical floor vibrations at the base of the showcases and work table examined are factors of 6.8, 11 and 16. Taking account of the type and fragility of the objects, the comparative values available in the literature and a safety factor of 2 (which would be usual in structural mechanics), a value of 1.45 mm/s was determined for the excitatory vibration measurements. The data logger recordings show that this value is exceeded very frequently.

The observations being made in parallel on the objects show that the construction work is already causing changes to the objects. Instances include increasing abrasion of shoe fragments that are being reconstructed and “wandering” objects: Given the scheduled construction measures, which are going to last for another three years, it is highly recommended that protective measures should be taken against vibrations, particularly to safeguard the artistic and cultural heritage items. According to DIN 4150-3:2016, either the vibrations of the uppermost ceiling or the foundation vibrations can be monitored. It is recommended that observations should be made at both locations, in the old building as well as in the younger parts of the complex. This will allow monitoring of the horizontal vibrations of the foundations – measured close to the outer wall – and the maximum ceiling vibrations in the vertical direction at the centre of the ceilings as a whole. A suggestion for the sensor configuration is: 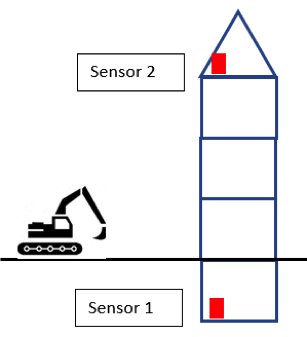